Louise and the Blustery Day...

A few folks have asked about the status of the trailer resto. I don't have any progress pictures or before/after shots. Just a little tale. Well, it goes a little something like this...

Last October my folks grew tired of listening to me complain that I had nowhere to fix the trailer. A nice sized Shelter Logic shelter went on sale at Menards and they were awesome and plopped down some cash for one. My Dad was cool and not only helped me go down to Janesville once to pick up the shelter but went back down again to get the second box that should have came home with us the first time around. Dad also helped me put together the shelter skeleton which is a pain but we got it done. We put on the tarps later with the help of my friend Kurt. All was well. I was happy as hell. I thought the shelter would serve as a great home for the trailer this last winter. Things didn't remain great for long.

About 1 week after getting the shelter up we had some trouble blow in. We were set to have a pretty good size wind storm come in one day. I thought it would cause some problems but wasn't thinking it would cause the catastrophe it caused. I had come home from work in the morning and waited up for a guy that was set to come to do a home inspection around 11:00am. The wind had already started to blow by the time I had gotten home. I went out and put a few more good sized stakes in the ground to help out the insanely small sized anchors that came with the shelter. I was planning to get a better set of anchors in the ground at some point. It just didn't happen in the small time frame after getting the shelter up.

Anyway, I kept looking out the window a little nervous about how it was going to fair in the increasing winds. About 15 minutes before the guy was suppose to show up to do the inspection I looked out the kitchen window to see the shelter crumpled in the front and in a odd position. I raced outside to find the shelter had broken some of the tiny cables and pulled a few anchors and stakes out of the ground. The back of the shelter had been blown up on to the Shasta. One of the feet of the shelter was blowing back and forth on the skin making a deep rut in the aluminum and opening part of the Pittsburgh seam. I pushed the shelter off of the trailer and tried to hold it down while I though about my options. While I was struggling trying to hold the shelter in place with my weight the winds kept blowing. The shelter was a horribly shaped kite in the wind and literally picked my big ass up off the ground and threw me into the back of the trailer a few times. So I franticly called Molly to call the inspection guy and cancel the inspection. The guy ended up showing up while I was using my body weight to hold the shelter. I told him to just do the inspection while I figure out what to do. Molly raced home and helped me hold the frame as I tried to take off the main tarp. Once I got the main tarp off the skeleton was more manageable to stake back down. The skeleton was bent up a bit in the front door area but wasn't that bad over all. Just a bit out of shape. I moved the trailer out of what was the shelter and inspected the damage a little closer. So far I haven't been able to see any cuts in the skin so that was one plus but it will be a lot of cosmetic repair besides repairing the Pittsburgh seam.

We left the shelter staked in place while we waited for the storm to stop and I could get some sleep. The storm went on for another 24 hours or so. It wasn't done doing it's damage. The back fixed tarp panel of the shelter isn't easy to take off so we left it in place. That panel acted like a sail during the remaining winds and crumpled the rest of the shelter down to the ground. The winds had broken many of the bolts and twisted and bent a bunch of the poles. Later I took down the rest of the shelter. I placed a order for almost 200 dollars in replacement parts to Shelter Logic. I was defeated.

I hate to sound so dramatic about the situation but that was how I felt. I pretty much threw a tarp over the Shasta and walked away. I didn't want to think about it at all. I was pretty burnt out by that point. I think it was about a month ago I started thinking about the project again. Sooooo.....

Right now I am putting up the shelter again. I am also working again on the front window restoration and rehabbing the screen door at the same time. Before the shelter incident I was scraping up the crappy linoleum and original tile in the Shasta. Once I can open up the trailer again I will be trying to finish up that mess. I have a ton of work to do. It is a bit daunting at this point.

Stay tuned for more!
Posted by Unknown at 8:36 AM

Email ThisBlogThis!Share to TwitterShare to FacebookShare to Pinterest
Labels: Shelter 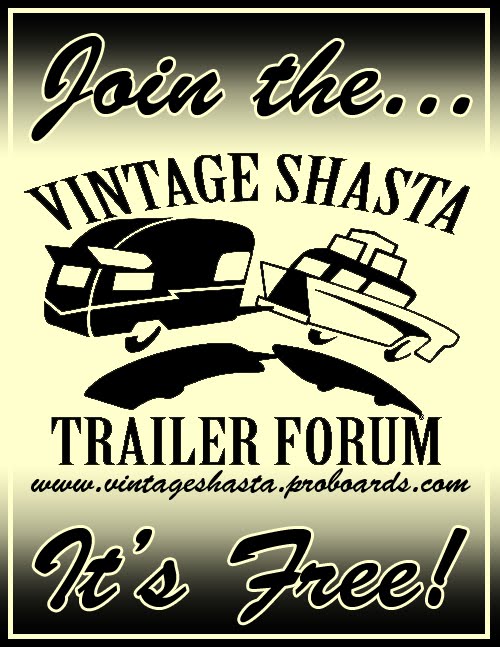 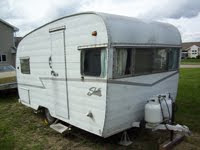